Welcome to Zhang Ziyi Infos, your best source for the Chinese actress since 2007. Zhang Ziyi is a famous actress known for her roles in Crouching Tiger, Hidden Dragon, Memoirs of a Geisha, The Grandmaster and so many other great films. Zhang Ziyi recently directed the short film Poem in the anthology film My Country, My Parents. Read her full biography here.
Published on In
Films I Pinco Pallino Public Appearances The Wasted Times Tiffany & Co.

New Project and Other News

Once and again, sorry for the lack of updates!

Project:
Ziyi seems to have a new interesting project. After John Woo’s “The Crossing”, Ziyi will shoot a film called “The Wasted Times“. The film will be directed by Cheng Er (Lethal Hostage). Ge You (The Banquet) will be part of the cast. The shooting should start soon.

Public appearances:
On September 25, the actress attended the store opening of the Italian brand “I Pinco Pallino“. She designed for the first time a girl dress (click here).
On September 24, Ziyi was in a water park and was photographed with a dolphin.
On September 20, she attended a commercial event for Tiffany & Co.. Several pictures are in the gallery.
On September 19, the actress attended the Bazaar Charity Night. She was absolutely stunning in her Lanvin dress.
On September 9, Ziyi and Jackie Chan attended the China Film Days in Romania. Both actors were dressed with traditional Romanian clothes and they received the honorary title of Friendship Ambassador to celebrate the the 65th anniversary of the establishment of diplomatic ties between Romania and China. 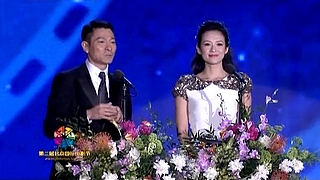