In Conversation with Zhang Ziyi at TIFF16

TORONTO (Sept. 16, 2016) — The Toronto International Festival (TIFF) on Thursday, Sept. 15, was three days from drawing to a close, but the atmosphere at the TIFF Bell Lightbox Cinema was still fresh and anticipatory.

Fans gathered an hour and a half before the scheduled program, bouquet in hand. The event “In Conversation with Zhang Ziyi” required more security than other film screenings. Two huge body guards were also present.

After an hour’s lineup, we were led into Cinema 2. Three cameras were already set up close by the stage, left, right, and center, catching all angles of the famous Chinese actress. Zhang came to TIFF16 as one of three jurors for the Platform selection, sharing the judging duty with esteemed directors Brian De Palma and Mahamat-Saleh Haroun.

The artistic director of TIFF, Cameron Bailey, came on stage to introduce the guest. As Zhang stepped out, he greeted her warmly and to loud cheers and applause from the audience.

A translator sat beside the actress. Kudos to Zhang, she spoke English throughout her conversation with Bailey, with full intention to draw closer to the audience. It was only during the audience Q & A later that Mandarin was used by some in the audience. That was when the very proficient translator stepped in to interpret.

Zhang was candid, open, pleasant and very friendly. She answered all questions directly, her spontaneity was admirable. The following are some highlights of the event. In the style of Zhang’s frankness and congeniality, and as Cameron Bailey called her, I will use her first name in the rest of the article.

Sent to a dance academy in Beijing at an early age, Ziyi knew that was not for her. It was grueling, yet she still tried hard to succeed. But it was after changing to a drama school later that she knew what she wanted to do, acting. Dance academy was about the training of the body while drama school the voice, and she took to it happily.

At the young age of 19, Ziyi was picked out by the prominent director Zhang Yimou for his film “The Road Home” (1999). The next year, she starred in Ang Lee’s “Crouching Tiger, Hidden Dragon” (2000). And the rest is history. At the beginning of her acting career she was shaped by two acclaimed auteurs.

“I always think there’s a lucky star above me,” Ziyi humbly said. Of course, much hard work is entailed in the road of success, and her achievements show the excruciating training she had to undergo in the process. Ziyi is known for her toughness and perseverance; looks like Cameron Bailey is one admirer.

“Why do you think you work so hard?” Bailey asked. After thinking a bit, Ziyi replied, “because I don’t want anybody who gave me the opportunity to be disappointed.” She had in mind Ang Lee, whose approval she had worked extra hard to gain.

A clip was shown from Lee’s film “Crouching Tiger, Hidden Dragon” wherein the sword wielding Ziyi was dueling with Michelle Yeoh’s fierce and much more effective long spear. It was a physically intense and gruelling fight. After the clip the following conversation ensued:

CB: I had no idea how you did that.

CB: This is incredible work.

No lucky star if one considers the trajectory of Ziyi’s hard-earned career success as an actor. Discovered initially by Zhang Yimou, then brought to international fame by Ang Lee, and later, more gratifying as she spoke, Wong Kar-wai, who directed her in “2046” (2004) and “The Grandmaster” (2013), Hong Kong’s submission to the 86th Academy Awards for the Best Foreign Language Film race.

How did she work with the famously ‘unscripted’ Wong? Those one page—‘flying paper’, as Ziyi referred them—hand-written instructions every morning the actors received from the director, without prior knowledge of how the story would go or what he wanted them to do until they showed up to work in the morning. That was when real acting could come out, Ziyi said. No preparation, no memorization of lines. The working relation was purely based on respect, trust, and friendship.

While he may have remained mysterious to her behind his sunglasses he wore constantly, Wong gave her lots of space and let her fill in on her own.

“He never told me what kind of performance he wanted. He knows me and he knows what he can drag out of me.”

Ziyi was candid and frank with her remarks, at times spontaneous, at times thoughtful. But most of the time, animated and descriptive. She answered her questions directly, never sought to compromise with diplomatic comments. Here are some of her thoughts on…

Wong Kar-wai: He gave me lots of space, always wants more out of me.

Motherhood and acting career: No conflict. She had brought her baby daughter to the set and taken breaks when she needed to nurse her.

Hate most in the acting process: The wait time.

Love most: When the character gives me a beautiful scene and a good acting partner as good as the scene.

Favorite actor to work with: Tony Leung (her co-star in “2046” and “The Grandmaster”)

The night, September 15th, fell on the much celebrated Chinese Mid-Autumn Festival. Ziyi had brought a box of mooncakes for the audience. The program ended cheerily when the six lucky winners walked home with their prize, but I’m sure all had felt the evening enjoyable and entertaining. 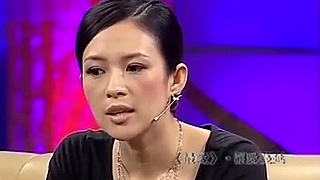 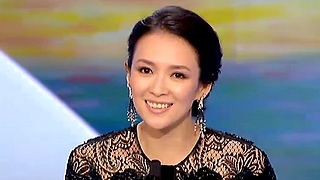