15 things to know about Zhang Ziyi

Zhang Ziyi is petite and fierce, a delicate beauty queen and a force of nature.

Three Chinese-language martial-arts films have been U.S. art house crossover hits in recent years, and the young actress has starred in all of them: Ang Lee’s “Crouching Tiger, Hidden Dragon” (2000); Zhang Yimou’s “Hero” (released this August after a long delay); and newly released “House of Flying Daggers,” in which she plays a mysterious blind dancer with some lethal skills during the Tang Dynasty.

Her next film should raise her profile even higher: She spent the past few months playing the lead role in the adaptation of Arthur Golden’s acclaimed novel “Memoirs of a Geisha,” directed by Rob Marshall as his follow-up to “Chicago.”

The actress, 25, and Zhang Yimou were at the Toronto International Film Festival a few months ago for the North American “Daggers” premiere. Theirs is an evolving relationship that began when he discovered the drama student at a TV commercial audition.

He wound up casting her at age 19 as the lead in her first film, the flashback love story “The Road Home” (1999), and she has been working steadily ever since.

Sitting on a sun-drenched outdoor patio, the Chinese actress, pony-tailed and casual in a big-print T-shirt, chatted breezily in English, which she has been learning, but switched to Chinese, with a translator on hand, when the right words escaped her. In a separate conversation, Zhang Yimou spoke through a translator.

Here are 15 things to know about Zhang Ziyi:

1. Why Zhang Yimou finds her so photogenic: “Her head is small, her face is thin, and that’s good for the camera. Beyond that she has this charm on her face.”

2. What she’s got that almost no other actress has: “It’s a rare combination of being sweet, slight and ferocious,” Zhang Yimou said. “And she’s also very explosive. She could be very quick and expressive with her feelings, especially her eyes. She has those eyes that always have something to say.”

3. Why those eyes are important: “There’s a difference between the Western and Eastern acting in culture,” the director said. “Asian people tend to be more reserved, so everything is shown from the eyes.”

4. How she was raised: Zhang Ziyi grew up in Bejing, and when she was 11, her father (a government economist) and mother (a kindergarten teacher) sent her to dancing school, in part to build up her slight physique.

5. What she was thinking when she left her dance training to attend drama school: “I just wanted to run away from dancing school back home,” she said. “Very simple, my thoughts.”

6. Whether she expected to become such a physical actress: “No,” she laughed. “Just happened. I don’t know. Step by step.”

7. Whether that on-screen combination of sweetness and ferocity is part of her own personality. “I don’t think so,” she said, laughing again. “Before `Crouching Tiger,’ I didn’t know I had that kind of power.”

8. What surprises her most when she watches herself on screen: “I can jump so high. I can kick them away.”

9. How she’s different now compared with when she made “The Road Home”: “I’m growing up,” she said. “I think [Zhang Yimou and I] trust each other, and this time he gave me a lot of space for my role, for this character. The first time he couldn’t give me such a complicated character.”

10. How Zhang Yimou views her progress: “She has been acting with different directors. She is good with expressing inner feelings and also in action.

Her English is getting better. This period of time is very important for an actor to rise up and grow, and she might become international.”

11. How working with Zhang Yimou is different from working with Ang Lee: “With Zhang Yimou, everything is in his mind,” she said. “When you’re shooting you give him two takes or three takes, and if he gets it, it’s, `OK, we got it. Let’s move on.’ Ang likes to see a lot of things, like 10 takes, and he wants to pick [something] from each take. It’s very different.”

12. How working with iconic Hong Kong director Wong Kar-wai, who directed her in the not-yet-released futuristic love story “2046,” differs from both of them: “No script. You don’t know the story. You don’t know who’s being in the movie. From the beginning you even don’t know your character. Everything is secret.”

14. Why she can’t compare Asian actors to American actors: “I only worked with Chris Tucker [on `Rush Hour 2′],” she said. “This one [`Memoir’] is no Western actors, all from Asia.”

15. The first movies she ever loved: Lars Von Trier’s “Dancer in the Dark” and Zhang Yimou’s “To Live.'” 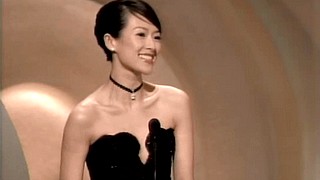