How do you see HERO’s influence upon your acting career?

(It is) a film I am proud of. It won’t bring anything to me and I still put myself aside. (???) I am very happy I have joint the production team, a team with very strong cohesion.

With so many good actors, did you feel being pressured?

Not much. I am just a participator, felt curious, never thought about what my role would be, and just wanted to participate. I have believed I can learn a lot of new stuffs (from it).

(Some) audiences said without your character, maybe the story might still work.

It will not. Moon (Zhang Ziyi’s character) played a key role (in HERO). It’s like a button which links (everything together). She can deliver the love between Flying Snow (Maggie Cheung) and Broken Sword (Leung Chiu-Wai), and through the “pretending” between them, through her (Moon’s) love to Broken Sword, to unleash Flying Snow’s deep love of Broken Sword, to sent Broken Sword’s heart and intension to Nameless (Jet Li). I never thought about whether (the story) will work without the role, but I think (without it the story) will be somewhat incomplete.

By the end she is still alone. (She) didn’t die.

If you can have a second chance, will you take the role of Flying Snow?

To be able to take the role, (I) will need a lot of time to steel myself. During the filming, maybe because director (Zhang Yimou) was too bold, other characters have become invisible. Actually all these roles are not easy to handle and maybe I just couldn’t handle. Like the character Moon, I have asked director whether it would be fine to cast a newcomer and he said although (the role) had very few scenes, it was not easy to handle. (Then) I (started to) feel heavily pressured.

Let’s talk about PURPLE BUTTERFLY. It is a story of the relationship between a female spy and several men?

Taking it, I finally got a movie in which I had more than just a few minutes. (Laugh) I think it is not about a “story”. Lou Ye (director) still sticks to his own style. The style cannot be found in the script, and it is invisible. But it is not purely just about a story or just about love.

I heard there is a very hot passion scene in the film. Have you ever hesitated?

It’s a kind of mood. I played an underground worker. To approach the target, I returned to my ex-lover, the character played by Nakamura Tôru. His superior was also my superior, and was (also) in love with me. He sent me to the boy (Nakamura Tôru’s character) and his heart was tortured. There is a scene: I agreed to be his date. I rediscovered the feeling from the past and the feeling of real love came back. This is the scene I remember the most. We left a room and walked to the end of an alley. He kept walking and I started to walk back. We left each other without a word. I kept walking but still wanted to see him. (I) walked slower and slower and suddenly turned around. I run to the end of the alley, once reached the boy, I lighted up a cigarette and stopped. Lou Ye said “cut”. Then the only thing left for me was just running back to the boy and giving him a look. But after several takes, I have become very excited and felt there was more to unleash. (I) asked Lou Ye, “can you give me a little bit more time? Don’t just let it end now.” Lou Ye agreed. At that time my emotion was very high. After run back, once saw him, I started to cry.

To be a good actor is really something extraordinary. I must thank Nakamura Tôru. He didn’t have to do anything, but he watched me very cooperatively. Lou Ye was also smart and he had moved in front of me. (?) I just couldn’t control myself. I felt that was not acting, couldn’t stop, just kept crying. You loved him so much. Then he quietly tried to calm you down. The next was that passion scene. Maybe just walked into the house, left the door open, and jumped to the bed directly. The scene would be done like that.

You just jumped to the bed directly?

No. Because we didn’t know much about each other and had few conversations. We were quite reasonable. Nakamura Tôru even said, “to shoot this kind of scenes, os Japanese usually sit down, have a cup of tea, and talk, to gradually built up (the mood).” But the mood had already built up and we didn’t have time for any tea, probably just rushed in and left the door open. It was really like that. But we didn’t make it too rush. We had a hug first. That scene was a good test for me and (I) didn’t have any distracting thought.

Were you asked to wear less?

No. I wore just like everyday. It was to show a kind of attitude. Looks like some people think passion scene is just “bed scene”, must stripping and having sex. Some passion scenes, like Moon’s big cry after those two persons’ death, were also big passion scenes.

Among Nakamura Tôru, Liu Ye and Feng Yuanzheng, who cooperated with you the best?

I remembered the most is the scene with that boy. The most relaxed was Liu Ye. I have known Feng Yuanzheng for a long time. He appeared in many movies and TV series. My mom likes him and even went to see him once. Liu Ye, Feng Yuanzheng and I are all working for the same troupe, China Modern Drama Troupe. So does Li Bingbing.

What is your look in PURPLE BUTTERFLY?

I curved my hair. This is where the misunderstanding came from: Liu Ye said I changed my look for the film. Later it became I had some plastic surgery. Liu Ye is a bit clumsy (note: not a bad word in Chinese). My look in the film is quite simple, the Qipaos (a kind of traditional Chinese dress) I wore are not as gorgeous as those from IN THE MOOD FOR LOVE. Lou Ye wanted a kind of documentary style. Therefore the actors did not wear makeup and the lightning was also very simple.

After CROUCHING TIGER, HIDDEN DRAGON, the Hollywood has formatted you as an “action girl”. Will HERO reinforce it?

Just go with it. I never thought about someday I would be called “action girl”. I never dreamed about making a martial art film.

Do you feel more confidence of doing actions?

I can’t say I am very good at it. (I) just more and more like it and want to make more learn learn more. When watching CROUCHING TIGER, HIDDEN DRAGON now, I ask myself how I went through it. I can’t remember how did I hold out till the end. At that time, I didn’t have time to think about what the film would bring to me. I was quite naive. I just concentrated on doing my job without any vanity. Later I started work under heavy pressure. Part of it was added myself and part of it was from the environment. Without that kind of pressure, maybe I would not achieve all these.

Do you think you have made any progress during the past year?

I hope the progress would not be noticed by me. That’s better. In other word, (I) should not try to think whether I made any progress or not.

What have you achieved through the films you made this year?

This year I only made PURPLE BUTTERFLY. Only one film a year. That’s a bit sad. But I will not regret turning down so many projects. If I cried when reading a script, or if something from the script suddenly caught my eyes, I would know I have found a good role. (I put) a lot of efforts on PURPLE BUTTERFLY. Just wait to see (what will turn out).

Are you hoping to play several characters can be remembered by the audiences?

I am not doing it for the audiences. Of cause, If people liked you, supported you, it would be great to do it for them. But more important, (you) must challenge yourself.

You are eager to do everything well?

I don’t know about now, but in the pass, I was really eager to do everything well. Gradually I have become afraid of being so eager. I hope I can rem my own individuality, people like it or not. Do not care too much about what people say and you will go through it. There hasn’t been anything (tabloid news) on me except that thing about Gao Feng. So ridiculous! (Note: Gao Feng is a Chinese singer has passed away in September and according to some tabloid report, Zhang Ziyi was his last girlfriend) This year, there hasn’t been anything too bad or too good for me. Very quiet and I feel very calm. But I don’t know whether the quietness caused the calm, or the calm caused the quietness. I have tried not to let myself floating on the surface and wanted to stay deep quietly. I hope people can see me making progress and that’s all what I’m asking for.

If you were asked to do a few minutes in a foreign project, would you take it?

No, absolutely not. I can only say a few (English) words and I can make English language movie? Being able to do skillful performance with my mother tongue, is what makes me happy the most. I have tried to speaking English in a film (RUSH HOUR 2), but didn’t have much confidence. What would happen if I went to the Hollywood? They would only give me a symbol. How about that? (I) am not in a big hurry to do something. This is my biggest change during the year.

Are you worried about your fame would fade out?

No. I don’t have a choice and I will go with it. I believe how much effort and time I have put in will have a payback in my film. 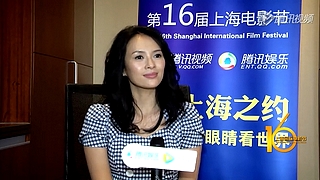 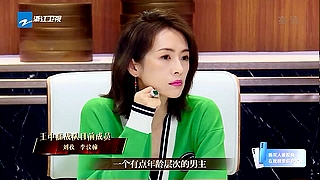