In the Mood for Zhang Ziyi

The fighting, flying, dancing Asian superstar becomes a love goddess for the ages.

Imagine a young, virtually unknown movie actress stealing a blockbuster out from under Denzel Washington and Catherine Zeta-Jones. And then, a few years later, she shines so brightly that her co-stars – let’s say Nicole Kidman, Hilary Swank, Cate Blanchett and Brad Pitt – are left in the shadows. And by the time she reaches her mid-20s, nearly every major director in the country has lined up to work with her.

Sound unlikely? Welcome to the extraordinary career of Zhang Ziyi. Of course, the 26-year-old actress hasn’t taken on those Hollywood stars yet, but she has outshone China’s and Hong Kong’s equivalents.

A Beijing-born dancer and student discovered during an audition for a shampoo commercial, she started out in Zhang Yimou’s lyrical drama “The Road Home” in 1999. But she made her first big impact the following year, in Ang Lee’s period epic, “Crouching Tiger, Hidden Dragon.”

A Hong Kong action film with an arthouse sensibility, “Dragon” should have been the vehicle that enabled long-established Asian superstars Chow Yun-Fat and Michelle Yeoh to become fixtures on the American movie scene.

Instead, all eyes were on Zhang, whose ethereal beauty and balletic grace only enhanced the strength and ferocity of her martial-arts moves. And when “Dragon” became the biggest-selling foreign film of all time, few gave the credit to Chow or Yeoh.

Since then, Zhang has made box-office smashes like “Hero” and “House of Flying Daggers” in China and “Rush Hour 2” in America. But her heart, she insists, remains in small films that tell intimate stories.

Zhang plays Bai Ling, a young woman who makes ends meet as best she can. For a single girl in 1960s Hong Kong, that means finding generous boyfriends. It is her great misfortune to fall for a womanizing writer (Leung) who has been destroyed by love once (in Wong’s 2000 “In the Mood for Love”) and has no qualms passing his heartbreak on to someone else.

The actress captures Bai Ling’s vulnerable dignity and immense pain so precisely, it’s difficult to reconcile the character with the Zhang who bounds into our interview wearing a denim miniskirt, tank top and flip-flops, and who might pass for 18.

Zhang, who giggles a lot and exudes much warmth, freely acknowledges the contrast between herself and “2046’s” Bai Ling.

“For me, this role was most difficult,” she says, speaking in halting English for part of the interview, and through a translator at other points. “I’m not like this woman. My friends are not like her. I have never experienced her kind of disappointment. The only way I could act this character is from using my imagination, what I think she’s supposed to be like.”

Grady Hendrix, a founder and programmer of the New York Asian Film Festival, observes that it is this deeply felt immediacy that allows Zhang to stand out, no matter how illustrious her co-stars.

“She goes up against icons and more than holds her own,” he says. ” ‘2046’ is full of good actors, but she’s so present, so much more magnetic than everyone else, that she comes across as the most alive human being in the movie.”

Eventually, Zhang built such an intense bond with the role that, she says, “I could not separate the character from myself. In the last scene, I started crying and I couldn’t stop. And I heard that they said ‘Cut! Cut!’ but I just lay against the wall crying. I couldn’t get up. Her pain was my pain.”

Ironically, it is the disconnect between her characters and her own life that usually drives her choices. “I always look for roles [lives] I wouldn’t lead myself,” she says. “I have a very simple life. I go to school, I come home, I make a film, I come home. These movies allow me to experience different kinds of living. Because in my own personal life there would not be the possibility to feel these kinds of experiences.”

Zhang’s life is not quite as low-key as she protests it is. She is a major celebrity in Asia, and a favorite of fashion photographers in the West. But though she has become, as Hendrix puts it, “a significant red-carpet presence,” she rejects the idea that she’s drawn to the more glamorous aspects of her profession.

“It doesn’t feel real,” she says. “Each time, when I’m wearing the gown, the diamonds, it feels like a part of my work, not my life.”

Her next film, “Memoirs of a Geisha,” is being produced by Steven Spielberg. If that’s a success, surely it would be hard for Zhang to resist the siren call of Hollywood?

She shakes her head, answering carefully. “I’m a very practical person,” she says. “I never think about what could happen in the future, as long as I have one good script. I want every character I play to give me the opportunity to contemplate. I like drama, deep, hard – ” she smacks her open palm with her fist – “difficulty.”

She could be referring to challenges of both the physical and emotional kind. As Nick James says, pointing to Zhang’s varied resume, she is “equally poised whether standing very still or flying across the room.”

Zhang’s deceptively restrained performance in “2046” offered her the chance to meditate on relationships. The night before our interview, she says, she was walking through the airport and realized that “our profession is very lonely. Because you can’t have the common human life. You can’t be with your love, your friends. I always go around this city for a few days, that city for a few hours. Sometimes, suddenly, I just feel that it’s really sad. So I think right now I just [can’t] have any life. Well, a young girl’s life.”

But is the tradeoff worth it?

“Yes!” she says. “The movies can give me a lot of things, a lot of happiness, a lot of confidence, a lot of – ” she looks to her translator to make sure she’s choosing the right word, and nods, “satisfaction.” 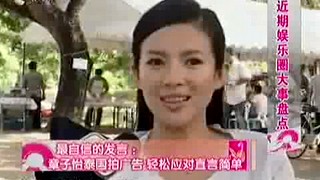 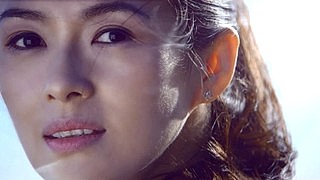