On The Red Carpet

Ziyi Zhang returns to the big screen this weekend in the martial arts drama film “The Grandmaster.”

The film tells the story of martial arts grandmaster Ip Man, who would go on to train Bruce Lee. Zhang plays Gong Er, the daughter of another grandmaster. Gong Er challenges Ip Man to a fight and the two develop a relationship.

OTRC.com correspondent Tony Cabrera recently talked to the 34-year-old actress about making the film, how “Crouching Tiger, Hidden Dragon” helped her realize her passion for acting and getting a little star-struck at the Oscars.

1. While “The Grandmaster” is about martial arts, it also has romance.

“The movie is about [a] power struggle, who will be the grandmaster of martial arts and also it’s about forbidden love [and] the tension that comes from it,” Zhang told Cabrera. “It’s not only about action, it’s also a lot of romance because it’s a Wong Kar Wai [the director] film.”

“I play this girl, she grew up in a master’s family, her father is a grandmaster. In the old time, women were not allowed to learn martial arts and somehow her father secretly taught her,” she added. “This girl, she represents independent, powerful — but still, she learned so much from [her] father — being yourself, knowing yourself and doing what you feel [is] right and she’s a very rich character.”

2. The cast underwent six months of martial arts training for the film.

“Wong Kar Wai didn’t want us to pretend we know martial arts, he wants us to be the artist in martial arts,” she said.

Zhang also explained that her instructors started off as nice, but their training sessions quickly turned into serious business.

“In the beginning, all the teachers, they were really nice to us. You know, they [were] nice, friendly and took photos with you, but after two days, that you were [a] movie star doesn’t mean anything to them, even when I’m crying for help,” she said. “They trained us like we were kids.”

3. One three-minute fight scene took a month to film.

“There were two beautiful fight scenes. One is — in the beginning, my character challenges our handsome and beautiful hero [Tony Leung] to a fight,” she said. “It’s about three minutes of the entire movie, but we shot for about one month.”

“That scene is very difficult and tricky,” Zhang added. “I like that scene a lot because as they [fight], you see the dynamics of their relationship [go] through subtle changes.”

“I call that scene love at first fight,” she said with a smile.

She also admitted to Cabrera that she isn’t really a big Bruce Lee or Kung fu movie fan.

“I’m not a Bruce Lee fan or Kung fu — I’m a girl, I love ‘Cinderella,'” she said with a laugh. “But somehow when I was so young, I was 19 years old, I got this opportunity to do [an] action movie, which was ‘Crouching Tiger, Hidden Dragon.'”

“The first time I went to the Oscars, I saw so many movie stars at the red carpet. I was like, ‘Oh my god! For me this is a huge party. I see Tom Cruise. I see Julia Roberts.’ I was just so excited about that,” she said. “Nothing much about the movie. I forgot why I was there. I [saw] so many great actors.”

“The Grandmaster” hits theaters on Aug. 23. Check out the trailer below and Zhang’s interview above. 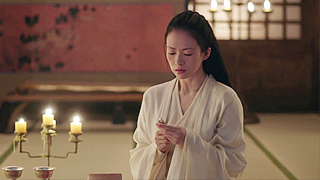 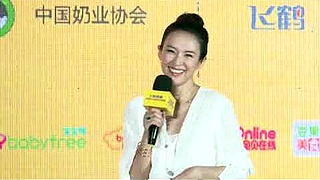