WHEN Chinese superstar Zhang Ziyi stays at the President suite of the Conrad Hotel, one expects an accompanying gaggle of agents, publicists, hair and makeup people hovering nervously to tend to her every need.

She does not disappoint.

But the mood is relaxed as she sits around the suite’s dining table, laughing and joking with hairstylist-turned-friend David Gan.

When asked to move to the living room for her interview, she hops slowly over to the couch.

She looks around with an expression of childlike wonder. For a moment, it looks as if she is re-enacting a scene from her debut movie, The Road Home.

The 22-year-old actress was in town in December to promote her latest Visa commercial which she stars with Mr 007, Pierce Brosnan.

‘Pierce is interesting and easy to work with. I was very excited,’ she says in slow, halting English.

Every one in the room beams at her effort.

‘This is my first time,’ she explains of her maiden interview in English, before bursting into laughter.

She started learning English in September last year. Even though the language handicap is painfully obvious, she persists with gungho confidence, like the tough onscreen characters she is used to playing.

But ask her about talk that she did not get along with co-star Maggie Cheung on the set of the soon-to-be-released Hero and her reply (this time in Mandarin) turns sharp.

‘You actually believe the Hongkong bagua (tabloids)?’ she asks dismissively.

Then, switching back to public relations mode, the chisel-featured porcelain beauty says in English: ‘Maggie is nice and kind. I learn when I see her work.’

Flashes of sweet smiles and doe-eyed gazes punctuate her pauses between sentences.

She turns philosophical when questions about her love life pop up.

‘We cannot control life. I know what I want to eat for dinner but I dare not even think what will happen tomorrow. I don’t plan things, who knows what will happen in five years?’ she says in Mandarin.

Zhang, who professes to only cook instant noodles and dumplings, then confesses she would like to get married and have children by 30.

But all such mushiness disappears when the interview ends and she prepares for Sunday Life!’s photo shoot.

‘It is cold,’ she snaps, glaring at her assistant who scrambles to turn up the thermostat. Hairstylist Gan, who has been primping and combing her hair every 10 seconds for the last half an hour, commits a boo-boo when he leaves her alone for 10 minutes to run an errand. Fed up with several strands of hair which get in her way, she commands her minder to ‘go get him’.

While he is being sent for, the minutes tick by and she starts to show increasing signs of boredom.

The same assistant puts on an upbeat Shania Twain CD.

But there is no appeasing her, it seems.

The Chinese diva turns round and leaves the room without another word with her publicist and Gan in tow.

She enters the suite’s bedroom, turns off all the lights there and goes to bed. 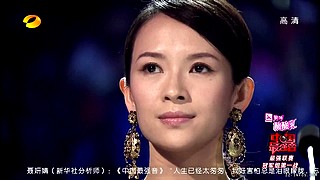 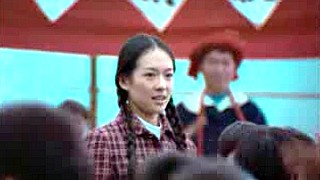