'She Has a Quality That Sets Her Apart From Others'

Director Zhang Yimou is the man with the Midas touch: he is one of China’s most successful filmmakers, with hits such as Raise the Red Lantern, and he discovered actress Zhang Ziyi, star of his film “The Road Home,” which opens in Asian markets next week. He speaks to Time Asia entertainment correspondent Stephen Short and reporter Susan Jakes. Edited excerpts:

Time: What was your first impression of Zhang Ziyi when you saw her auditioning for a shampoo commercial at her school?

Zhang: The first time I saw Zhang Ziyi was probably only for about five minutes. But she made a relatively good impression on me, so I videotaped her. As it turned out the ad fell through and we never shot it. So I just put the videotape away and didn’t think about it or look at it for a long time. A year later I was preparing to shoot a new movie and decided that I needed a new face, a young face. So I looked at the tape again. And when I did I was struck by what a pure, fresh, delicate face she had. I set up a meeting with her so that I could see her again in person. I had her audition for me.

Time: What did you have her do at the audition?

Zhang: It was a tough audition: we made her cry, laugh, read lines, and gave her a pretty hard time. But of course, she performed beautifully. We were looking at other people for the same part and we were comparing their relative strengths and weaknesses. We sent all of them to the countryside for a month, to see how they’d cope in the little village where we were planning to shoot the film [“The Road Home”]. We watched them draw water from a well, cook and so on. Zhang Ziyi auditioned for us at least three or four times before we made the final decision. She performed well each time and we finally decided she was the one. I was very impressed with her.

Time: We spoke to Zhang Ziyi a couple of days ago and she is a remarkably mature, sophisticated young lady. How much were you struck by that when you first met her or did you think she was still very naïve?

Zhang: She’s matured since I first met her. She’s made these films now [“The Road Home,” “Crouching Tiger, Hidden Dragon”] and she’s gotten used to talking to reporters. So perhaps she seems mature. But when I first met her, when she was 19, she didn’t strike me as being any more mature than your average 19-year- old. She didn’t understand anything. All she knew how to do was play. When we started shooting the film, she felt tremendous pressure to perform. She wanted to study the script all the time. But what we needed for the film was a very simple, very pure girl. I didn’t want her to be under too much pressure lest it cause her to mature or to lose that simplicity and purity. So I took her script away from her and didn’t let her read it. Every day I sent her off to play because I wanted to preserve her purity, her childishness. And it worked. Frankly, even when I look at her now I see a not atypical 21-year-old. She’s still a kid. It’s just that now she can say a thing or two in an interview. She just seems mature.

Time: Is she someone who makes you want to spoil her? Having spent time with her, we both had an urge to want to protect and spoil her. Do you feel the same way?

Zhang: No, I’ve never really felt that way. She’s very young and she’s had such a strong start to her career. But I think she needs to train herself. She has to learn to confront her life on her own. If someone, for instance, has offered her a role in a film, she’ll sometimes ask me to read the screenplay to see what I think. She asks me for professional advice but as for other matters, I think it’s important that she face things on her own. When she was shooting “Crouching Tiger” I was working on my own project and was pretty busy. But once I asked her how the film was going. She didn’t say much at all except that she was working extremely hard. She mentioned that she was doing a lot of jumping from high places and that it was very dangerous. I got the feeling she wasn’t particularly impressed with herself. But when I saw the movie I was amazed. She was so great.

Time: What is your opinion of how successful she might become? Do you think you’ve set her up on a platform and she’s poised to become a very big Chinese star the world over?

Zhang: It’s very hard to say. Every actor’s success depends on the opportunities he or she is given. But looking at her now, I think she’s not going to do badly at all. First of all, she has had very good opportunities. She has worked with me and then with Ang Lee [director of “Crouching Tiger”]. She’s also very intelligent. I never guessed she’d learn kung fu so quickly. She’d studied dance, of course, but she’d never studied martial arts. I talked it over with Ang Lee once and he was also very impressed with how quickly she’d learned things. It’s very rare to find Chinese actors who can both fight and act, and rarer still to find these talents in an actress so young. This is the quality that most sets her apart from others. A lot of my Chinese friends think that her prospects for future success are superb. I agree.

Time: She made the point to us that it doesn’t matter how successful a Chinese film star you become, you will never receive adoration from the Chinese public. Is that true?

Zhang: This is a particular feature of the Chinese national character. It seems to derive from some aspect of traditional Chinese culture. It’s an attitude that resides deep down in the innermost being of people.

Time: But where do you think this attitude comes from?

Zhang: I really don’t know. But I have the same problem: I’m constantly criticized and the most acute criticism comes from Chinese people. They constantly attack me for exposing the country’s backwardness to the outside world. The same rules apply to actors, particularly young actors. People don’t understand that they ought to be helping these young actors become more successful. It’s a Chinese phenomenon. There is a saying, “qiang nei kai hua, qiang wai hong,” which means that the flower that blooms within the walls only looks red to those outside of them. Hence the flowers we grow in China are often appreciated by non-Chinese audiences. I think the fact that Zhang Ziyi recognizes this at such an early age is a very good thing. It will allow her to handle the problem much more effectively.

Time: Can you tell us something that a reader would find surprising about Zhang Ziyi, something people would not know or would not have read about her?

Zhang: There were a lot of scenes in “The Road Home” that required Zhang Ziyi to run in the forest, and we had to shoot them in slow motion. But for every running scene we shot — and we were filming at a relatively high altitude — she fell down during half of the takes. We must have done 300 or 400 takes and she fell down during half of them. Often we’d be shooting and all of sudden she’d fall out of the range of the camera. It was exhausting and it must have been quite painful for her. And she didn’t get sick. But when you watch the scenes they’re just beautiful. I personally found her stamina astonishing. Later, she filmed Crouching Tiger but she barely told me what she had to do physically. But when I saw the film, again I was just amazed. I asked Ang Lee how many of the stunts she’d performed herself and he told me that she did the majority of them. She rarely used a stunt double.

Time: Did she ever cry during those running scenes? And did you have to give her a big hug and say, “Look, it’s O.K. You were fine?”

Zhang: We were often filming her from very far and we couldn’t see her fall. I’d just yell to her through a bullhorn: “Do it again! Do it again!” There was one scene in the movie when she was running in the snow and she fell, and then got back up and kept on running. We hadn’t planned that but we kept the cameras running. It just made for a perfect shot. She shot that scene 15 Times and then I called out to her: “Okay, Ziyi, you can come down now.” And when she came down we realized she was crying.

Time: So did you hug her?

Zhang: No. I just said, “Don’t cry. Don’t cry,” and sent her to have her makeup redone.

Time: Zhang we’d like to thank you for giving us so much time, and we’d like to send you a copy of the film Les Amants du Pont-Neuf [The Lovers on the Bridge]. I [Stephen Short] often wish my life more often felt the way your movies make me feel.

Zhang: I hope that’s the case. By the way, next year I want to film a kung-fu flick, and right now I’m preparing a ballet version of “Raise the Red Lantern.” I’ve written the script for the ballet and rehearsals start next month. The premiere will be on May 1. You’re invited to both. 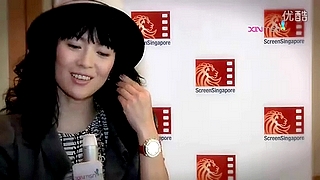 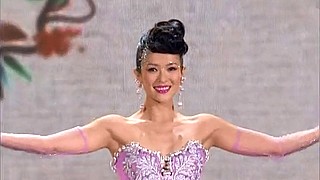