• The previous films in the series were all live-action. It is the first film in the franchise in 14 years. Chronologically, the film takes place after the original films.
• Karai’s first movie appearance. Karai is the adopted daughter of Shredder in the 2003 animated TV series, and was sent from Japan to take over the foot when Shredder died in the Comic Book.
• The Teenage Mutant Ninja Turtles movie with the largest money budget ever made. The amount of it’s budget surpasses the live-action trilogy’s amounts.
• As revealed on the director’s commentary on the DVD one of the early drafts of the script had Raphael briefly dying and Donatello using Winter’s technology to bring him back to life. This idea was turned down by Peter Laird however who disliked the idea of having one of the turtles dying.
• The film was dedicated to the memory of Mako. Mako played Master Splinter in the film and was announced as the voice of Splinter at San Diego Comic Con the day before he died. Fortunately, he had finished the majority of his acting. —IMDb
• Ziyi’s first animated film and first voice role in her career. 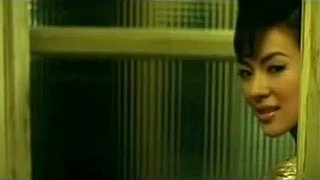