Story: Cecile (Zhang Ziyi) is a stage magician who performs magic in a traveling circus. She performs with Christophe (Chris Martin), a young magician who serves as Cecile’s assistant. The duo perform various routine magic acts, such as impalement arts and shapeshifting. Cecile is married to Claude (also played by Chris Martin), a famous magician who, in addition to being an alcoholic, is violently aggressive to his wife. As Christophe continues to perform with Cecile, he starts to notice evidence of Claude’s aggressive behavior towards Cecile, including bruises across her arm and witnessing Claude shouting at his wife, reducing her to tears. Source

“Coldplay songs are my favorites, but I’d never imagined that leading man Chris Martin would also love my movies. He invited me and the director is a long time friend of mine, so this is it,” Zhang explained about how their collaboration actually materialized. She participated in the video shoot during China’s Spring Festival in February in Los Angeles.

The music video was presented in the form of a black and white silent movie, with Zhang playing the role of a beautiful magician named Cecile. Meanwhile, the band’s singer, Martin, plays two roles: that of Cecile’s husband and that of famous magician Claude, as well as her assistant, Christoph. The video tells the story of how Christoph tries to become a magician himself in order to charm Cecile after realizing how problematic the relationship between the magician and her husband in fact was.

The video got 3.7 million views within the three days was after being uploaded to Youtube.com.

“The story’s creative idea is very unique, depicitng a magician’s love,” Zhang said, “The filming techniques are not so different from [those used in] a feature film, but doing a feature film is much more exhausting.”

As Zhang remembered, there was so much fun while shooting the video. “Chris would have to play two roles, one of which was evil. His evil role is very dramatic so he would get false teeth and nails. He was so into his role, that when his false teeth fell out, funnily enough, he didn’t even realize.”

Zhang changes styles nine times in the video, which, she says, are vintage but fashionable. “These are not what I can try out when doing a film, so it’s very satisfying.”

As for Zhang’s impression of Martin, she said the singer was actually younger than she thought, “And he would always thank me during the filming. I think he is an especially grateful man. ” Zhang also revealed that people will have the chance to see an extended color version of the music video. 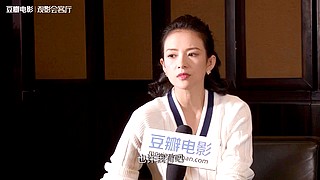 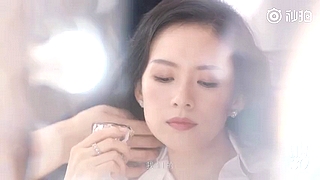